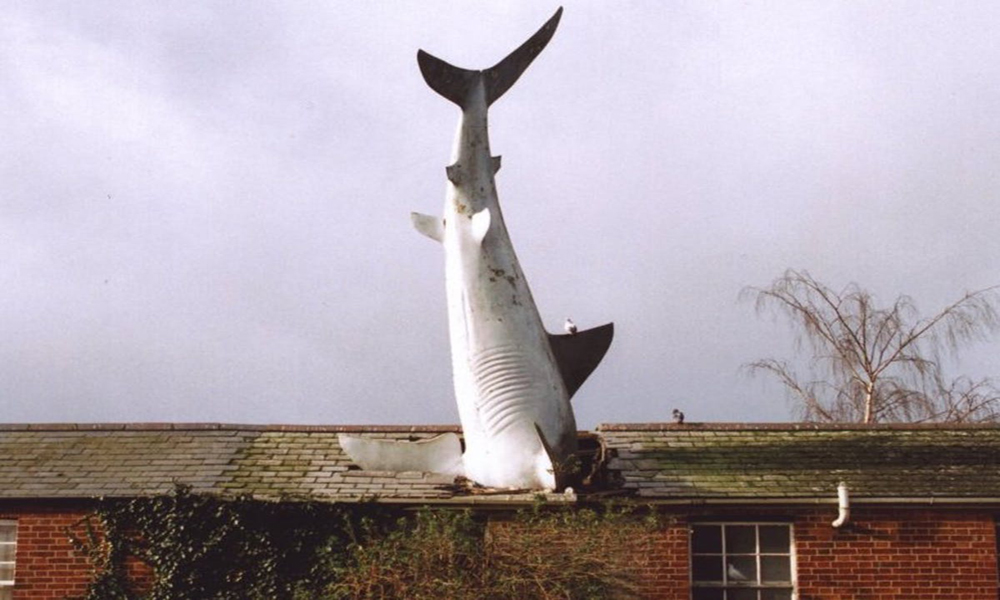 Andrew Brandon2021-04-01T12:22:38+00:00
Housing construction usually has very basic elements that will then be customised with decorative work on the inside. However, sometimes homeowners and architects wanted to try something different in terms of exterior housing construction, and that’s how we ended up with these 5 weird and wonderful houses across the UK that are so out of the box that they’ve even become tourist attractions and alternative holiday destinations.

Located on the end of a tranquil nature reserve, The Balancing Barn is the vision of Dutch architectural collective MVRDV that consists of a 4-bedroom barn which is partly suspended above ground. The property even includes the whimsical touch of a children’s swing being installed at the very end of the underside of the building. This building, like most of the weird and wonderful structures scattered across the UK, has been repurposed as a holiday destination, with colourful interiors and innovative glass walls and floors.

The carefully thought out design continues to the exterior, being fully decked out with steel cladding across the entirety of the structure to give a futuristic feel in a very rustic setting. MVRDV’s goal with this structure is to make people re-evaluate everything they thought they knew about the countryside and make modern architecture accessible to those living these countryside areas.

Even though this structure looks completely different to most structures found in these areas, particularly in such close proximity to a nature reserve, MVRDV have made sure to keep some features true to typical countryside architecture. The collective wanted to keep to tradition in terms of the form of the structure as a whole, and along with the pitch of the roof, the structure is built like a traditional barn, but with a futuristic twist in its aesthetics. 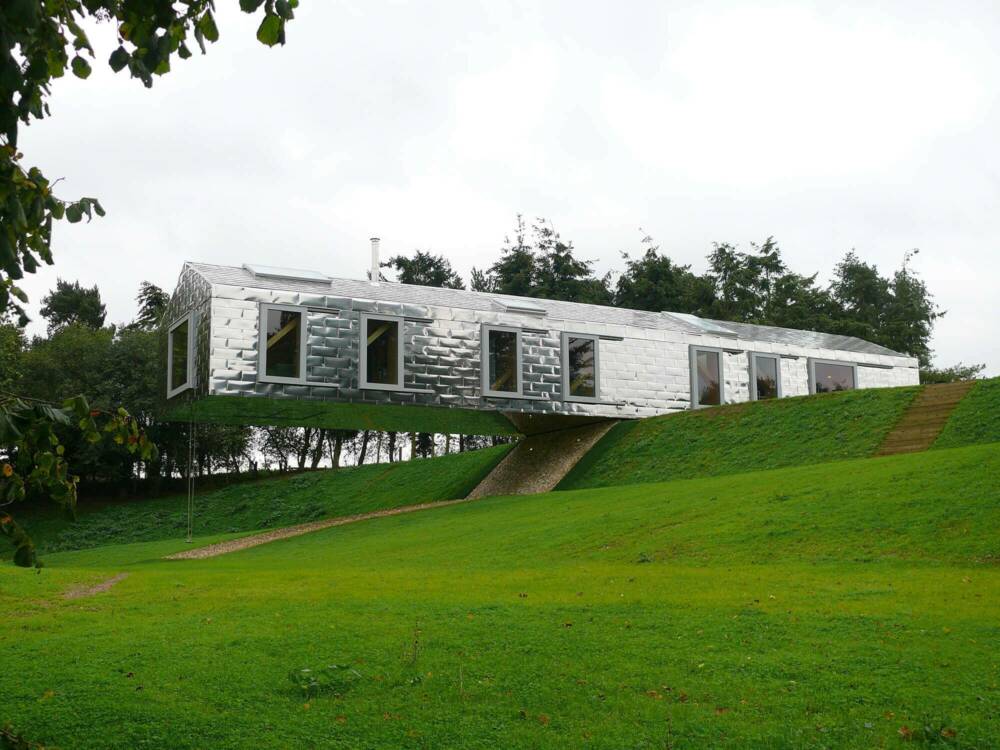 When walking down the London street of Leinster Gardens, at a glance, houses 23 and 24 look nothing out of the ordinary. However, when viewing these houses from the back, most are surprised to learn that, they are not houses at all, just a set of front walls to disguise the fact that in around 1858, these houses were demolished.  The front of the façade walls contain the same structural and aesthetic features as the real houses that are situated either side of them.

This includes the iconic mid-Victorian era designs that were popular at the time, such as pillars, sash windows and balconies. The only noticeable differences between these “houses” and the real houses is that the doors and upper windows are false, with the latter being painted grey where the glass should be and the doors containing no letterboxes. The reason for these houses being demolished is the installation of what was known at the time as The Metropolitan Railway, now known as The London Underground.

Leinster Gardens runs between the stations of Bayswater, and one of the hubs for cross-country travel in the UK, Paddington Station. The front walls of these houses were kept to maintain the flow of terraced housing on the rest of the street, and to make sure the short stretch of uncovered tracks behind it are not exposed. Due to this, the two façade houses are maintained and are the responsibility of Transport For London. 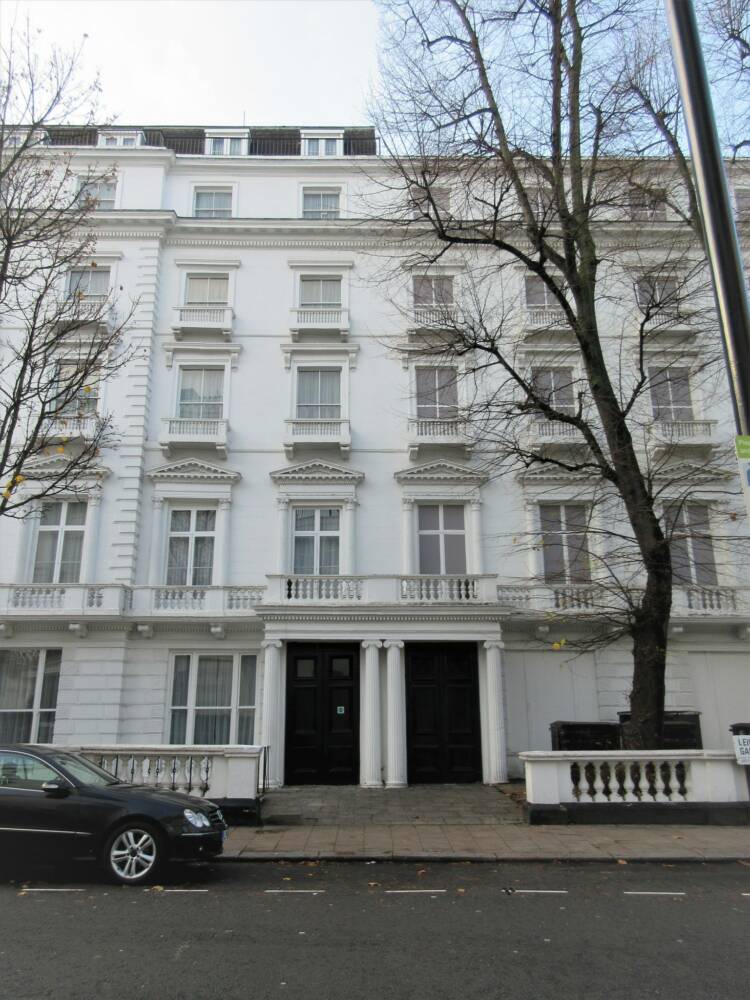 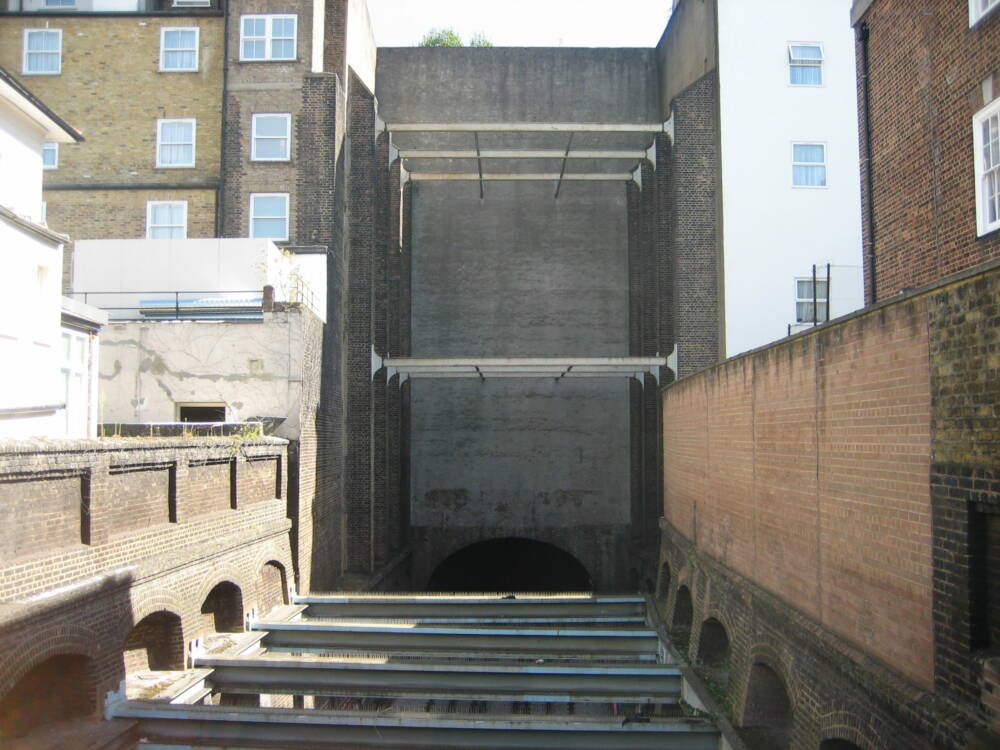 Just a stones throw away from Leinster Gardens is 5 Thurloe Square, also known as The Thin House. At its thinnest point, this South Kensington building is only 6ft wide, which most would deem to be completely unliveable. However, the building plays some optical trickery with its wedged shape and actually widens out to 34ft, much to the relief of any prospective buyers. This block of studio flats was created by architecture student George Basevi, as well as many of the other houses on the street.

Many were baffled by the fact that Basevi managed to create 7 studio flats in such a small space. The reason for the thin profile of this building again lays with the Metropolitan Railway, or The London Underground. Just like in Leinster Gardens, 23 of the houses on Thurloe Square were sold to the railway in 1867 for £3,000, nearly £340,000 in todays money. Some of the houses were demolished and some had to sacrifice a hefty portion of their garden space. To the rear of 5 Thurloe Square is where the two Central London tube lines connect, making it an essential part of the then Metropolitan Railway, much to the dismay of the landowner of Thurloe Square, H.B Alexander.

Even though some of 5 Thurloe Square was demolished, Basevi still created a property that is just as liveable and even more sought after than the other fully standing houses on the street. The top floor flat of 5 Thurloe Square, measuring in at just over 600 square foot, went on the market in 2016 for a staggering £895,000.

House In The Clouds – Thorpeness, Suffolk

Back to Suffolk for another wacky structure in the middle of the countryside. Formally a fully functioning water tower, the House In The Clouds was built in 1923 for the purpose of receiving water pumped from the Thorpeness Windmill.

Although a necessity, the architects of the original water tower felt that the structure was an eyesore on the picturesque Suffolk countryside. The displeasure of the architects and residents allowed for work to commence on a cottage being built at the very top of the tower, where the 50,000-gallon water tank was being stored to try to create a prettier view for the residents of Thorpeness.

At first, the cottage had no function, other than to provide a less unpleasant view, but when the water tower became redundant in 1977, the cottage was made in to a functional living space. Although extremely strange looking on ground level, the house can provide brilliant illusions from further away. Those visiting the Thorpeness Meare for example, can see the house just above the trees, giving the illusion that the house is floating in the sky, hence the name.

The house boasts 5 bedrooms, 3 bathrooms and sits on an acre of privately owned property. Just like the Balancing Barn, the House In The Clouds has been opened up as a holiday destination, and the ‘room at the top’ provides visitors with panoramic views of the Suffolk landscape for miles. 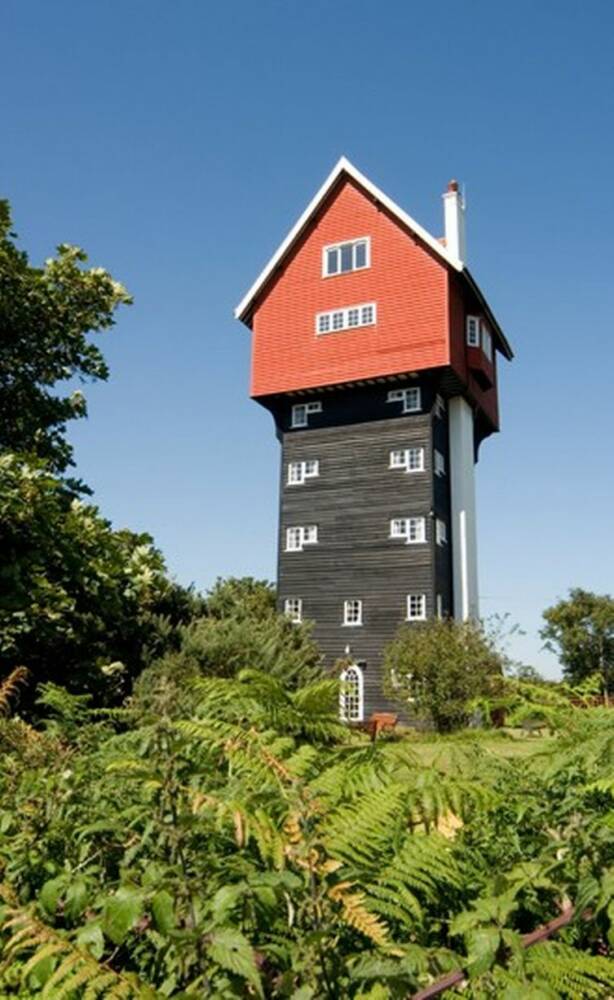 Saving the weirdest until last, this house situated on New High Street in Oxford looks like any other family home, apart from the fact that it has a gigantic fibreglass shark sticking out of the roof. First appearing on August 9th 1986, the project was commissioned by the owner of the house at the time, local radio presenter Bill Heine and crafted by sculptor John Buckley. In his own words, the sculpture was created to “express someone feeling totally impotent and ripping a hole in their roof out of a sense of impotence and anger and desperation”.

This statement was particularly in relation to the use of nuclear power and the disasters and devastation they have caused, which is why was erected on the 41st anniversary of the nuclear bomb being dropped on Nagasaki. The structure itself weighs in at 200kg and is 25ft long, purposely done to make a statement, and since then the structure has gained a lot of attention, but a lot of controversy as well.

Oxford City Council have made several attempts to have the piece removed, both on the grounds of safety and claiming lack of planning permission for such a project. However, after masses of local support, in 1992, central government ruled that the shark could stay put as long as it didn’t harm the visual appeal of the area. The home has been run as a guest house since 2018, with homely simple interiors that will almost make you forget about the shark that has seemingly crashed through the ceiling. 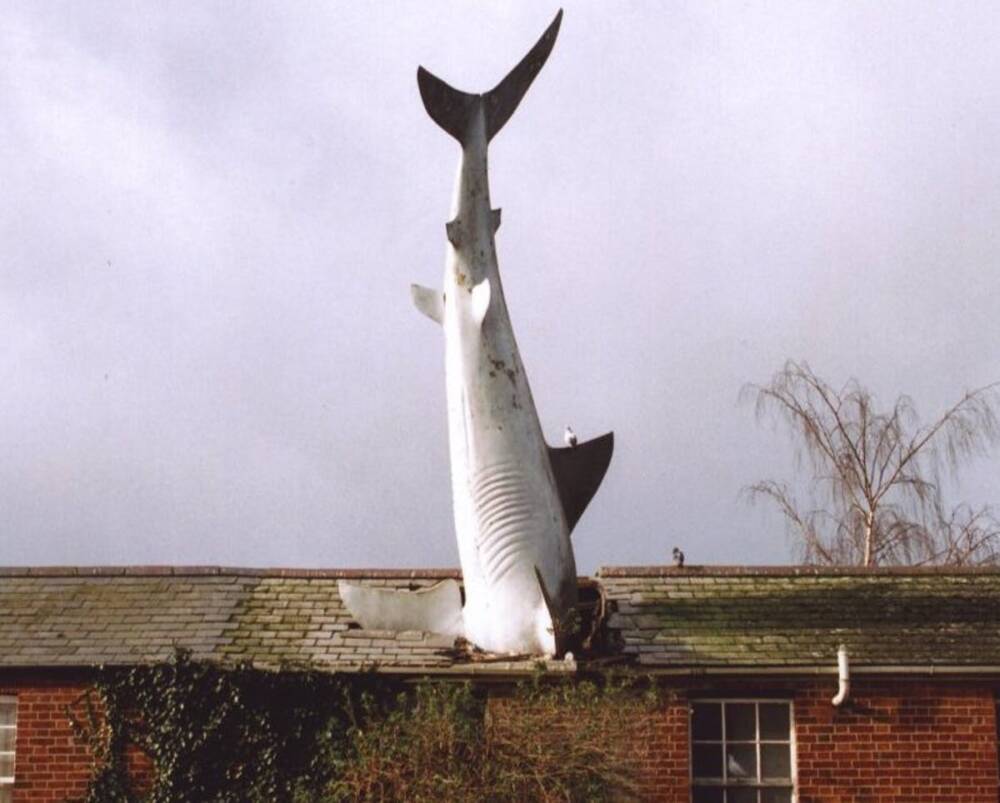 If you want to visit any of these weird and wonderful houses, check out the links below to book yourself in for a holiday with a twist:

House In The Clouds

This website uses cookies to improve your experience while you navigate through the website. Out of these cookies, the cookies that are categorized as necessary are stored on your browser as they are essential for the working of basic functionalities of the website. We also use third-party cookies that help us analyze and understand how you use this website. These cookies will be stored in your browser only with your consent. You also have the option to opt-out of these cookies. But opting out of some of these cookies may have an effect on your browsing experience.
Necessary Always Enabled
Necessary cookies are absolutely essential for the website to function properly. This category only includes cookies that ensures basic functionalities and security features of the website. These cookies do not store any personal information.
Non-necessary
Any cookies that may not be particularly necessary for the website to function and is used specifically to collect user personal data via analytics, ads, other embedded contents are termed as non-necessary cookies. It is mandatory to procure user consent prior to running these cookies on your website.
SAVE & ACCEPT
Go to mobile version